Well, it started on Friday. Five days of skidoo travel, with nearly 800 kms and 10 hour plus days to get six parties in and out of various mountain areas of Greenland. Skidoo breakdowns every day, made the whole outcome in doubt and at times we thought we would not get back to Constable Point (CNP) base again.

We were already one skidoo down (doo 4) due to an engine failure and only had 3 skidoos when we really needed 4, due to the group sizes, so we started some journeys overloaded. 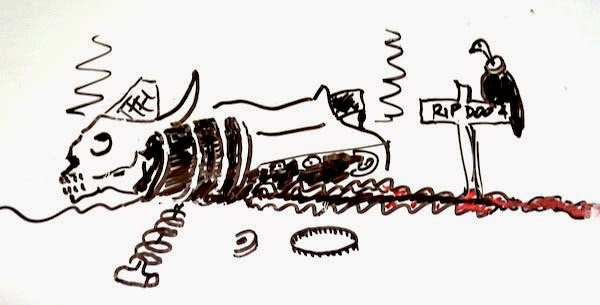 Four groups arrived on the Friday and we split up to have an individual assigned to each and help them get organised. Two groups had to be taken out that day for what we estimated to be a 6 hour round trip to north Liverpool Land (blue line on map – 135 kms). 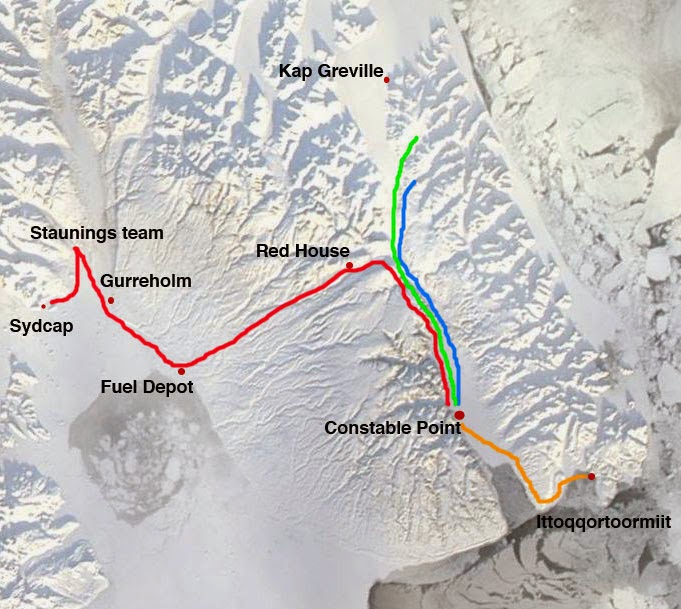 The problem was, that the flight did not get in till 3.30 and it wasn’t till about 5.00pm that we were able to set off. Much stress in the clients as they had such a quick turn around and much stress in us due to the late start and the fact that the weather was windy, cloudy, flat light, trying to pack with spin drift everywhere, having to dig every doorway out several times to get anywhere and -10.

We got the two groups in OK with some difficult navigating in the poor conditions and after a few kms on the return, the skis broke on the red people carrier. We had to dismantle the whole thing and strap it onto a sledge to continue. At about 11.00 at the top of a hill, in the windiest spot, a shock absorber broke under my ‘doo. We had a spare and installed this, but did not get back to CNP until half past midnight.

Up again at 7.00 am back to North Liverpool Land glacier (green line on map – 200 kms). We had to move one of the groups from the day before because we had not time to get them to the right place last evening and get a group of 7 up the glacier. Weather was great and all went well up the glacier with us using our new skidoo rope system to travel on the glacier. We had to take the kit and people up separately making multiple trips up the steeper glacier snout.

On the way back we discovered a broken wheel bracket under a skidoo. We were supposed to spend the night at the Red House Hut on the way to Sydcap, but this was now impossible.  We had to return all the way back to CNP and telephoned Steve and Darren to take ‘doo 4 bracket off at base and be ready to fix our one. We got back at 8.00pm and they worked late into the evening to make the repairs as we had to set off for Sydcap early next day (red line on map – 350 kms).

Next day we set off to try and reach the Staunings group, collect them and then spend the night at Sydcap. 10kms from CNP another shock absorber broke. We had no spare so had to haul the ‘doo back on a sledge back to CNP. The pit stop boys already had the other shock off ‘doo 4 and we were ready to set off again by 12.00pm. This time we did not have time to pick up the Staunings team and so went straight to Sydcap for the night getting there about 7.00pm.

This time the trip was uneventful and we had time to take pictures of the magnificent icebergs. 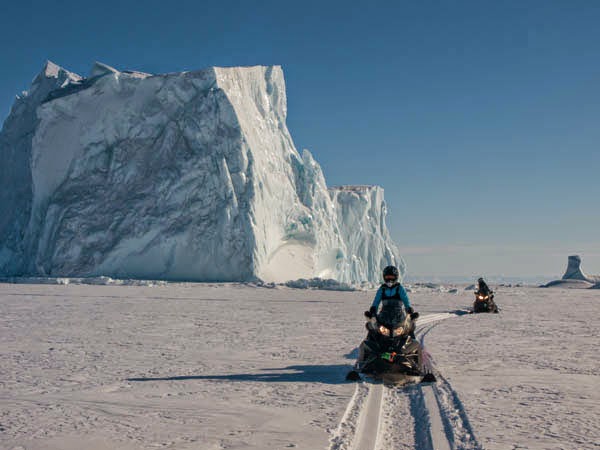 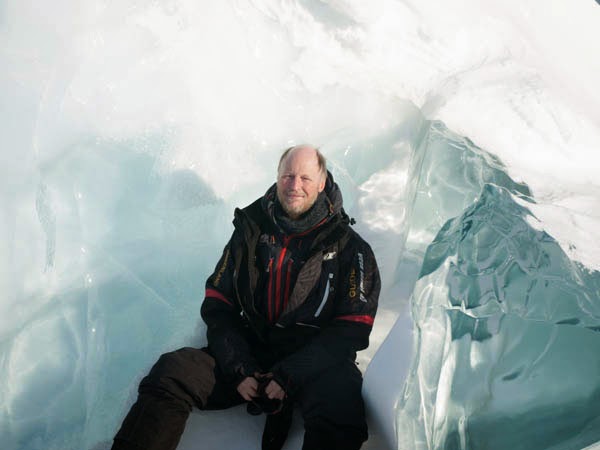 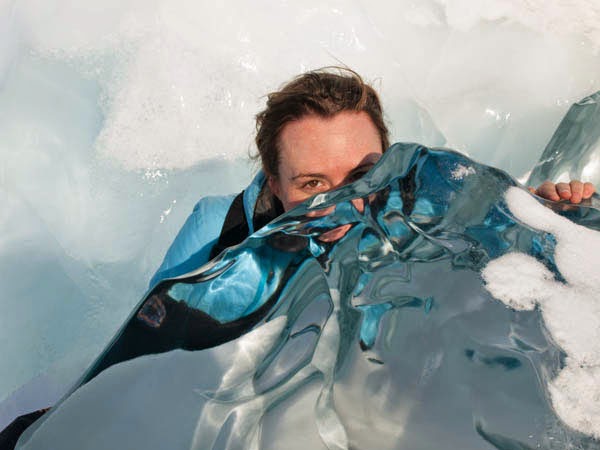 About 30mts from the house, another shock absorber broke. The bolts had also sheared from a stress bar under the skidoo. We had one last shock absorber, but could not fix the sheared bolts to re-fit the bar. We now really felt we were a bit stuck. We had long risk assessment discussions over dinner of rehydrated curry. If we carried on the next day and collected the Staunings group of three with a broken ‘doo, the risk of complete breakdown on the 200km way back to CNP was high. We would have 6 people, three sledges and only two ‘doos with one broken one. If it broke on sea ice then we would have to spend ages getting everything to land and the group would miss their flight. The route back was not easy to tow a ‘doo on a sledge and we would have no capacity to carry 6 people.

The problem was solved when I managed to cut into the end of the bar with a hacksaw and create a grove with which to turn the sheared bolt shaft with a screwdriver and extract it. We had spare bolts which would fit to reinstall it to the undercarriage. Another late night, but Clair, Beth and I went to bed much more confident of our chances.

Next day off to pick up the Staunings guys, but a severe vibration under the repaired doo gave some concern.  There was no option but to keep going. On the way back, we passed some polar bear tracks which looked far too fresh and lovely ice formations in the river bed. 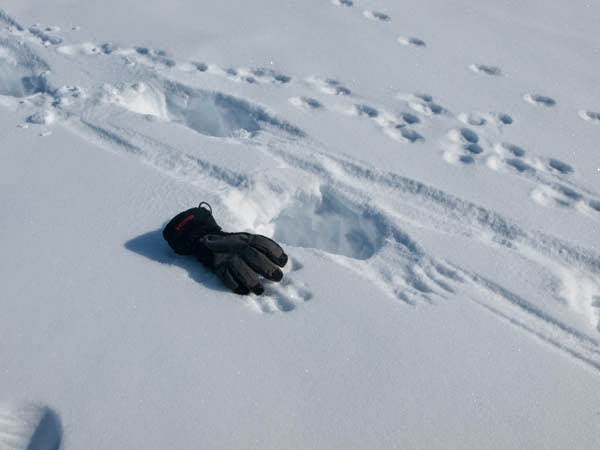 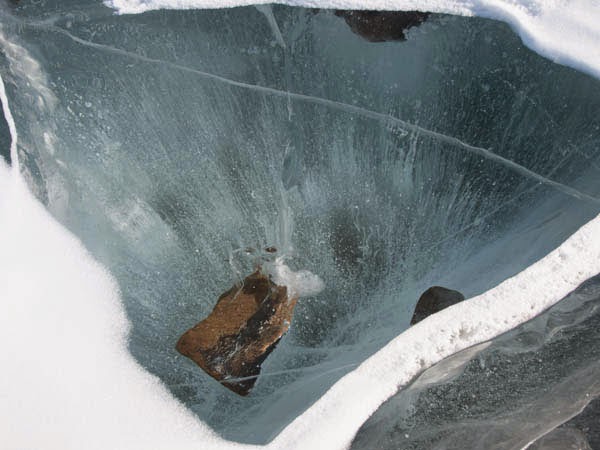 All went well until a wheel bearing broke on a track wheel on the way to the Red House. We had no spare – keep calm and carry on. Back to CNP at 7.30 after 12 hours to an airport dinner.

The last day was to take a group to Ittoqqortoormiit (orange line on map – 100 kms) and bring another group back to get their flight at 7.15pm. With the wheels all fixed, we got there with no trouble at 1.00pm to pick up the flight group, only to be told that their flight was now at 3.30pm! This put us under severe time pressure. I felt like I was on fire and someone kept throwing petrol on me! We made it with 30 mins to spare and saw the group off.

We are all now completely whacked and having some well earned rest days with some time to fix the carnage of broken ‘doos. Thanks go to my team of drivers and pit stop crew, Claire, Beth, Steve and Darren who all did a great job under some stress. Steve and Beth have now gone back to the UK leaving us three at CNP.
Posted by Unknown at 11:28