Only a day to go before my flight out of CNP. We've spent the week repairing the skidoos with the spare parts that arrived, digging / sawing out the containers and moving one of the groups to a different location, but they were quite close, so it only took a few hours each day.


We have to get two groups out from North Liverpool Land in the next two days. One today and one tomorrow. The weather was really bad today and also forecast for tomorrow. They have to catch thier flights on Thursday, so there is no option but to try and get to them.


1st  group all back now after an epic 7 hr journey in at best flat light and at worst full blown white out and constant navigation. Now snowing with 40km winds.
All the group are now in the Weather Haven trying to dry out.


The tracks kept disappearing in the flat light and only the GPS unit showed the way.

Doos still causing some concern.
Doo 3 still vibrating and right at the end had an engine warning light and cut out on stop. Now starts again, but what about tomorrow?
Doo 2 vibrating due to an unidentified fault. Can't see anything due to blizzard.
Doo 1 happy.

The pick up tomorrow is on a glacier, so we need good light to travel on it. Let's hope the weather improves or we won't be able to get up to them. 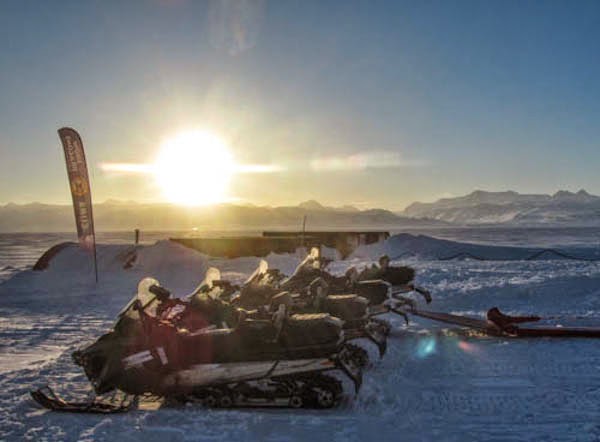